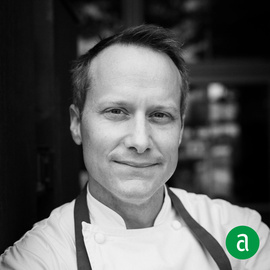 “When I was training for Bocuse d'Or, my good friend Rich Rosendale gave me a solid piece of advice which has stuck with me, "Focus on what you can control. Everything else you just can't stress about."„

EXPERIENCE
2019 - Present
Chef Partner
Press Restaurant
St. Helena, CA
2015 - 2019
Co-Founder and Director of Culinary and Media
Hestan Smart Cooking
Napa, CA
2015 - 2017
Author
Chasing Bocuse: America's Culinary Journey to the World Stage
USA
2015 - 2017
Gold Medal Coach
Bocuse d'Or 2017
Lyon, France
2013 - 2015
Silver Medalist
Bocuse d'Or 2017
Lyon, France
2011 - 2013
Executive Sous Chef
The French Laundry
Yountville, CA
2007 - 2011
Chef de Cuisine
Bouchon
Yountville, CA
2004 - 2007
Poissonier, Saucier, Sous Chef
Per Se
New York, NY
2000 - 2003
Sous Chef
Le Bernardin
New York, NY
2000 - 2000
Stagiaire
Le Moulin de Mougins
Mougins, France
2000 - 2000
Stagiaire
L'Essentiel
Chambéry, France
1999 - 2000
Fellow
Escoffier Room at The Culinary Institute of America
Hyde Park, NY
1996 - 1997
Busser, Line Cook
The Williamsburg Inn
Williamsburg, VA
EDUCATION
1999
Associate's Degree in Culinary Arts
The Culinary Institute of America
Hyde Park, NY
1996 - 1997
French, English Literature
College of William & Mary
Williamsburg, VA
I would say there are two jobs that most impacted my career. The first was actually at culinary school at the CIA in Hyde Park where I worked at first as a student worker and then as a Fellow at the Escoffier Room (now Paul Bocuse Restaurant) under William Phillips. He was meticulous about everything, especially cleaning and taking care of what we were given, which if you've ever been to a culinary school kitchen isn't normal. Little did I know I would work for the master of detail when I took a position as part of the opening team at Per Se with Thomas Keller in 2004. I thought I was a good cook until I went there and was surrounded by the incredible talent that had been assembled to helm that kitchen.
When hiring, I look for respect, humility, a positive attitude, eagerness to learn, and patience. One note, any resume that has multiple one-year stints or less basically hits the bin immediately. I'm looking for team members who want to invest in us which in turn allows us to invest in them.
One thing I can’t live without in order to do my job is patience. We work hard at Press to create a culture and environment where our team can thrive and grow. Every day there are new difficulties, frustrations and challenges – it is only with an attitude of positivity and patience that we can rise above the fray and maintain a positive work culture for the rest of the team.
The constant opportunity to learn and grow is what inspires me to continue to excel in this industry. What an incredible opportunity we have every day to discover new ingredients, new techniques and new ways of thinking about food, service and hospitality. Every time I start to feel like I've "arrived", I see other amazing chefs doing things I've never thought of and it makes me eager to learn more.
I am incredibly blessed to have a wife in the restaurant business who not only understands the demands of our profession but shares my passion for it. One thing I've learned is that work/life balance is less like two even scales and more like a pendulum that swings back and forth. It is critical to be intentional with the time we are given especially with family and to take advantage of the time we have in between the long hours.
Education is a real discipline in our profession and I think what separates the best from the rest of the pack. We are so busy it is a challenge to carve out time to read and develop oneself and that is the best source of education. Instagram is inspiring and pictures are motivating, but they don't translate to action, technique and refinement unless one really digs beneath the surface and understands what makes those things we see special, whether an ingredient, method or style.
Disclaimer: Individuals featured in the Inspirational Career Timelines section have been nominated by peers, colleagues and/or other members of the hospitality industry. It is to the best of our knowledge that each individual has demonstrated leadership and acted as a positive role model for others.