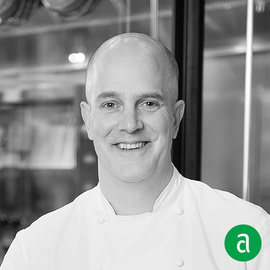 “Work for great people and take your time. Developing a craft takes time. Most importantly, always do your best.„

EXPERIENCE
2018 - Present
Chef
Leonelli Taberna & Leonelli Focacceria e Pasticceria
New York, NY
2010 - 2017
Chef
Lincoln Ristorante
New York, NY
2004 - 2010
Chef de Cuisine
Per Se
New York, NY
2002 - 2004
Sous Chef
The French Laundry
Yountville, CA
2000 - 2002
Sous Chef
Craft
New York, NY
1998 - 2000
Chef de Partie, Culinary & Pastry
Gramercy Tavern
New York, NY
1997 - 1998
Chef de Partie
Les Celebrites, Essex House Hotel
New York, NY
1997 - 1997
Chef de Partie
Auberge du Vieux Puits
Fontjoncouse, France
1996 - 1997
Chef de Partie
DANIEL
New York, NY
1994 - 1996
Chef de Partie
The French Laundry
Yountville, CA
1993 - 1994
Chef de Partie
Aqua
San Francisco, CA
1992 - 1993
Chef de Partie
The Mayflower Inn
Washington, CT
1992 - 1992
Chef de Partie
The Greenbrier Resort
White Sulphur Springs, WV
EDUCATION
1993 - 1993
Associate's Degree in Occupational Studies
The Culinary Institute of America
Hyde Park, NY
As a chef, I challenge myself to continue to learn, be a mentor to my staff, and be responsible to my partners. Providing a future for my family is also significant, my life changed ten years ago after I got married. My wife and my two children are the most important people in my life.
I knew I wanted to pursue cooking when I was in high school. After graduation, I moved to Hawaii and worked there as a cook for a few years. There I realized that I needed to properly go to school to build a foundation and focus on my career.
When I was in culinary school, I worked at the Mayflower Inn in Connecticut, not far from where I grew up. John Farnsworth was the first chef that I worked for that I would call a “chef’s chef”. He is an incredible teacher; he encouraged me to get out in the world, travel, and learn as much as possible.
Being a chef is a lifelong process. You have to keep studying, learning, looking for a new or better way to do things. Constantly push yourself to learn.
Attitude trumps experience: when hiring, what I look for the most is attitude, humility, and the desire to learn. Aspiring professionals also need to understand and accept that there is a lot of hard work that goes into working in this industry. It will require patience, discipline, and the willingness to make sacrifices.
Traveling and discovering other cultures is unquestionably one of the greatest sources of inspiration. I was fortunate enough to visit Japan a couple of years ago. It was a very significant trip that I still think about sometimes. The culture of respect and pride that the Japanese people have for their work, towards one another, for the ingredients, it was all deeply inspiring. As a New Yorker, I also feel lucky to be surrounded by an incredible food culture.
Leading by example is key. You have to come up with creative ways to educate and challenge your team. For example, putting up a great family meal or coming up with ideas for new dishes and trying them out together. After doing this for 30 years, I know that we can learn something from every member of the team and that we need to let the staff have a voice. There’s always going to be someone who looks at something differently and shows you how to do something better.