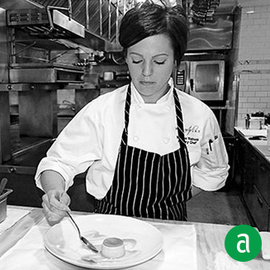 Melissa Walnock, Lecturing Instructor and Pastry Chef at The Culinary Institute of America in New York, shares her career timeline and advice for up and coming talent.

“Never be afraid to ask questions. If you're intimidated by other Chefs and don't ask questions about new techniques, you'll stop learning. If you stop learning, you will soon stop truly cooking. The passion will be gone. One of the most beautiful things about this job is that there are constantly new things to absorb.„

EXPERIENCE
2011 - Present
Lecturing Instructor / Pastry Chef
The Culinary Institute of America
Hyde Park, NY
2009 - 2011
Pastry Chef
Restaurant Nicholas
Red Bank, NJ
2006 - 2009
Pastry Chef
Tabla
New York, NY
2005 - 2006
Pastry chef de partie
The French Laundry
Yountville, CA
2004 - 2005
Pastry Sous Chef under Joe Murphy
Jean-Georges V Steakhouse
Las Vegas, NV
2002 - 2004
Head of Production under Johnny Iuzzini
Jean-Georges
New York, NY
2001 - 2002
Pastry Cook under Victoria Burghi
Union Square Café
New York, NY
1999 - 1999
Pastry Cook under Chef Elmar Wolf
The Breakers
Palm Beach, FL
EDUCATION
Associates of Pastry Arts
The Culinary Institute of America
Hyde Park, NY
Bachelors of Professional Studies
The Culinary Institute of America
Hyde Park, NY
I learned the hard way when starting out as cook that chefs don't really care about your opinion or reasoning on why you did something the way you did it (which is usually the wrong way). Chefs want to hear “Yes, Chef”, followed by you running to fix your mistake ASAP. When working in a busy restaurant, there is no time for small talk.
Floyd Cardoz gave me great advice while I was the pastry chef at Tabla. After working in some pretty intense kitchens for intense chefs before Tabla, I ran my pastry station the way I was accustomed to kitchens being run–yelling a bit too much. After a month, Chef Cardoz pulled me aside to tell me had hired me partially because he thought I was nice. I didn’t need to act this way to get the results I wanted. I immediately changed the way I managed my cooks. They respected me not only for the desserts we were making but also because of the respect I showed them.
I wish I knew when I was starting out that everything was going to be ok. Working in restaurants can be overwhelming and stressful. The emotional toll can be too much. After a few years of anxiety and some tears in the walk-in, I realized mistakes aren’t the end of the world. The chef may have yelled at me today, but that doesn't mean it has to happen tomorrow. After a while I was able to tolerate the yelling and hear the message.
I learned some important lessons in my first job. I learned how to work efficiently in tiny spaces and create useful habits. Also, kitchen folk are a different breed, especially for a young female, and I learned how to interact with these cooks. I learned a lot about the ins and outs of being a female in a kitchen. One of the most important lessons: You need to rely on your skills, not your looks. In the end, I don't care how hot you are, if you can't cook with the best of the boys, you'll never be accepted.
If you have a job you don't particularly like or a boss you don't respect, take note of all of the things you don’t want to do or become. Remember those things as your career advances.
The longer you are in this industry, the more people you meet. The cooking network is small and you are only 6 degrees from the last bridge burned. ALWAYS, treat your co-workers with respect and never walk out of a job. Be a professional or everyone else will hear about you.
Disclaimer: Individuals featured in the Inspirational Career Timelines section have been nominated by peers, colleagues and/or other members of the hospitality industry. It is to the best of our knowledge that each individual has demonstrated leadership and acted as a positive role model for others.