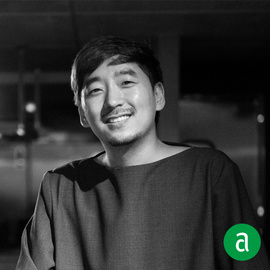 Junghyun ‘JP’ Park, Chef/Owner of Atoboy and Atomix in New York, NY, shares his career timeline and words of advice for up-and-coming professionals.

“I would say a definitive turning point for me in my career as a chef, was when I interned at The Ledbury in London during my undergraduate years. Before I had this opportunity, I was a diligent, hardworking student who had big dreams but with minimal experience in the culinary world. After my internship at The Ledbury, I realized that a good restaurant, led by a great chef, with passionate and inspiring peers was an amazing educational experience. I shifted my goals towards securing a cook position abroad, and immediately upon graduation, I moved to Australia. „

I've enjoyed cooking since I was young, and I was lucky to experience cooking first hand at home due to my mother being a great home cook. As I got older, I chose actively to invest in my dream, and I was diligent about pursuing my culinary interest. I would learn as much as I could about restaurants, chefs, food sciences, and prioritize my time and money to experiencing different dining destinations.
I like to think that it's not about having this magical, perfect work-life balance at all times. It's more about adjusting as you go, knowing how to prioritize and where to sacrifice. You can't have everything, so it's about deciding what's important, what can wait, what is unnecessary, what is critical, and what is a luxury. It's crucial to determine these priorities for yourself, and to be mindful and know that it's always a working process.
When hiring, I look for what Koreans call "nunchi" - something akin to the ability to quickly read a room, interpersonal interactions, and situations. The ability to pick up on how you can best assist or help another person or teammate is critical in the co-dependent, high-stress environment of the kitchen. It is one thing to be a good, efficient worker, but if you can't create synergy with your team, it's hard to become a valuable member.
As the Chef and Founder, I am actively trying to create a natural and active place of learning, through collaboration with inspiring leaders in the global cuisine culture, educational trips with producers, and even in the details at our restaurant, such as exposure to Korean artisans. I want our restaurants to continuously evolve and be a place where both my guests and team can enjoy, learn, and be exposed and motivated by new opportunities.
Inspiration, for me, is everywhere. People often think that Chefs are focused only on food and beverage, or this specific world, but I draw inspiration from something as passive as a childhood memory, my current favorite t-shirt, or music. Today, when we are all so interconnected to each other's works and musings via the internet, I'm consistently finding new exciting ideas and thinking of how to express and weave them into my food and dining culture.
I try to keep an open mind at all times and take in new perspectives and experiment. When I can find the time, I read cookbooks and other educational materials for new techniques and ideas. I am also very keen on following chefs, designers, restaurants, and other inspirational figures on social media to consistently expose myself to fresh ideas and inspiration.