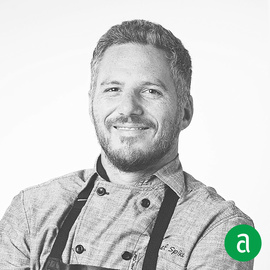 Spike Mendelsohn, Co-Founder of PLNT Burger, Executive Chef for Vim and Victor and Chef/Owner for Sunnyside Restaurant Group, shares his career timeline and words of advice for up-and-coming professionals.

“Whether it is to a different part of town or new corner of the world, you can always find inspiration in traveling. Usually, it is right in front of your face. Unless your phone is there. „

Culinary Institute of America
New York, NY
I have worked with a lot of incredible people who have always told me to keep my eyes open and keep my will for curiosity. Those two simple ideas have stuck with me as I have grown in my career. A lot of the skills you learn in the kitchen will come from watching the techniques and asking about what you see others doing.
The biggest impact in my career was my apprenticeship at Les Crayeres. During my time in France under the tutelage of Gerard Boyer, I fell in love with French techniques, food, and culture.
It was during my time at CIA that this career path really clicked. My whole life I have always helped my family at their restaurants, but it wasn’t until my time at CIA that I realized this was the profession where I needed to be.
I always look for someone with a strong will but whose behavior and attitude is not arrogant or prideful. Being humble can help you survive in the kitchen when things get hot. Acute listening is also something I look for in new team members. There is a lot going on in the kitchen and you need to be able to understand, remember, and respond.
Knowing how to work with people at different stages of their career, I feel, is a crucial skill in getting the best from your team. With new team members sometimes you need to have more of a micromanagement style as they get up to speed. Carefully observing the work of new employees will help them build a strong foundation in your kitchen. As you start to hire more experienced cooks, allowing them the freedom to be independent can bring a lot of new ideas onto the line.
I think the key to keeping my team motivated is communication and transparency. The kitchen can get very hectic during a busy service and making sure everyone understands the goals. Talking about what needs to be done during service can often keep you ahead of any issues that will arise. Nothing can kill the momentum of the kitchen more than being caught flat-footed.
You will always find me with a notepad and pencil. You never know when an idea will hit you or when you’ll discover a place or ingredient that you need to remember. I find a notepad can often be faster than trying to take the same note on your phone.
I know it's cliche and you probably get this answer a lot, but Danny Meyer’s Setting the Table, is an essential book that every chef or Front of House staff member should read.
Do a lot of self-reflection. I often picture myself among the sea of industry greats and think about my career and where I want to take it. I think this helps me stay grounded and makes me realize that I still have a lot of work to do.