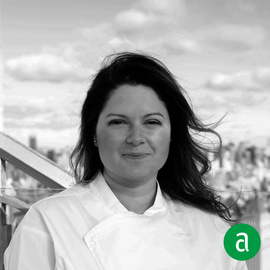 “There was an open kitchen at Patisserie Douce France so we could see the faces of our customers. I remember making something simple - I think it was mille-feuille - and it made every customer's day. When people eat dessert, they’re indulging. They’re eating for the purpose of enjoyment alone. I know nothing better than bringing people joy.„

EXPERIENCE
2018 - Present
Executive Pastry Chef
Crown Shy
New York, NY
2017 - 2018
Executive Pastry Chef
Manresa
Los Gatos, CA
2012 - 2017
Executive Pastry Sous Chef
Eleven Madison Park
New York, NY
2011 - 2012
Pastry Cook
Jean-Georges
New York, NY
2008 - 2010
Pastry Cook
Ritz Carlton Hotels
Denver, CO
2008 - 2010
Pastry Cook
Ritz Carlton Hotels
Naples, FL
2004 - 2008
Pastry Cook
Patisserie Douce France
São Paulo, Brazil
EDUCATION
Degrees in Hospitality and Advertising
University FAAP
São Paulo, Brazil
Masters of Science in Marketing
Golden Gate University
San Francisco, CA
My first kitchen job in São Paulo made a tremendous impact on my life and career. Chef Fabrice Le Nud, was French and very old-school. In other words, he was hard on us. However, the kitchen fundamentals he instilled in the team shaped my career. In order to become a chef, Le Nud insisted, you need to be able to do every kitchen task, no matter how small. Foregoing prep was not an option: every senior member of the kitchen team must be able to perform every task. Understanding the fundamentals and proving myself when I was young and impressionable was invaluable— especially as a woman.
When I’m hiring, I look for people who are humble. I have no interest in candidates who think they know everything. I want people who are open to learning and know that there is an infinite amount to learn. In terms of practical skills, I look for attention to detail, organization, and ability to prioritize tasks effectively.
I try not to micromanage my teams. I’m specific about what I need, then I let people make their own mistakes. When someone makes a mistake, they never make it again. In turn, I’m not afraid to point out when something is done wrong or sharing words of affirmation when people execute well. I like to tell people when they’re crushing it.
When I add dishes to a menu, I want them to be interesting for both my team and the guests. That often means a dish will incorporate a new technique or an unfamiliar flavor. It’s a good way to make sure our cooks are consistently learning.
I can’t live without my team. I’m not a solo act.
The most essential books for me are "On Food and Cooking: The Science and Lore of the Kitchen" by Harold McGee, "Baking & Pastry: Mastering the Art and Craft" from The Culinary Institute of America, and "The Cook’s Illustrated Cookbook" from America’s Test Kitchen.
Disclaimer: Individuals featured in the Inspirational Career Timelines section have been nominated by peers, colleagues and/or other members of the hospitality industry. It is to the best of our knowledge that each individual has demonstrated leadership and acted as a positive role model for others.