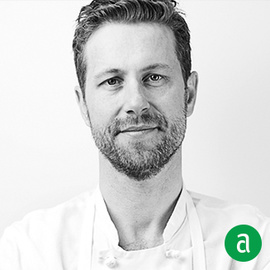 “My goal is to find the best people – inspire them in the kitchen, give them opportunities, and finally teach them how to make a great economic model in the restaurant business. It’s truly the greatest feeling when your employees can share in the success of the business, knowing they understand how it got that way.„

2008
EXPERIENCE
2004 - Present
Executive Chef / Co-Owner
Frasca Food and Wine
Boulder, CO
2011 - Present
Executive Chef / Co-Owner
Pizzeria Locale
Boulder, CO
2001 - 2004
Chef de Partie
The French Laundry
Yountville, CA
2002 - 2002
Stage
Pierre Gagnaire
Paris, France
2000 - 2001
Stage
La Taupiniere
Pont Aven, Brittany, France
1999 - 2000
Stage
Jamin
Paris, France
1999 - 1999
Stage
Butcherie Nivernaise
Paris, France
1998 - 1999
Prep Cook
Old Warson Country Club
St. Louis, MO
1996 - 1998
Baker
Breugger’s Bagel Shop
Gunnison, MO
EDUCATION
1999 - 1999
Certificate d'Aptitude Professionnelle
Ecole Gregoire-Ferrandi
Paris, France
1997 - 1997
Art History Degree
Washington University
St. Louis, MO
Being told growing up, “If you work really hard at something and love what you’re doing, eventually you should be great at it”, stays with you. Without having a great upbringing, I wouldn’t be as disciplined, motivated and hardworking - this is something you can’t teach people, it starts when you are a child.
Thomas Keller taught me that extraordinary attention to detail and the highest standards are pillars to a great kitchen. Just when you thought something was clean, it was nowhere clean enough. He raised your bar higher than you could have imagined. That awareness hasn't left my side.
Benoît Guichard at Jamin was a person that truly embraced tradition, a dying art in this industry. He really believed that even simple or classic recipes could still be improved with focus and repetition. Today’s way is constantly "what’s next?" and you often miss the opportunity to make something even better. Just because it's simple, doesn’t mean it can’t be wonderful. And just because it’s simple doesn’t mean you have to change it.
When I left Jamin, Benoît Guichard said to me “If you keep doing what you’re doing, you’ll arrive." Which meant, in his best English, that he felt I would get there in this industry, or succeed. It was a huge compliment at that time, which made me realize that as long as I was training, I should only seek out employment in the very best restaurants. Never settle for an average place.
I wish I could have had someone sit down with me and say early in my career, “Here’s the deal - cooking is really important, but it’s not the only thing”. It’s important to understand the economic discipline that can create a sustainable business. Sadly cooking is the only focus for most young chefs and often the reason so few succeed.
I love what I’m doing. I enjoy both cooking and, most of all, problem solving. If I didn’t like what I’m doing and didn’t enjoy trying to diagnose and solve problems, I’d say forget it because it's really hard sometimes.
Steve Ells and Monty Moran, Co-CEOs of Chipotle, have been huge mentors over the last four years. The way they are able operate a very large restaurant business like a nimble small restaurant is extraordinary. Additionally, the people side, the human side of running a restaurant, is forgotten in most restaurants. They are the standard bearers of great culture - caring for your people, setting incredibly high standards, and empowering them allows a restaurant(s) to go further than ever imagined.
We used to think the only way to inspire our teams was culinarily - trying to be really innovative, seeking new products, and changing the menu. Now, we inspire the team from the culture side as well. We continue to let our team know we are proud of them, believe in them, and genuinely want them to succeed, which is very inspiring to us and them. As a result, we have seen a whole new rise of people empowered to do amazing things.
It’s hard to continue to educate yourself with tons of reading and books because there seems to be less and less time. Family and work and travel have cut into a lot of that time. However, I love cycling and try to get out most mornings I am in town. I ride with people in other businesses doing exciting things, which is often is some of the best education.