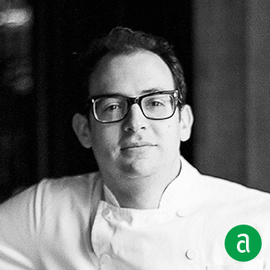 Josh Even, Executive Chef of Tofino Wines in San Francisco, shares his career timeline and advice for up-and-coming talent.

“I am inspired by hard work. I love having the satisfaction of a hard day's work behind me. Everyday after prep or after service, I feel a sense of real accomplishment. Of course I love the food, and I love the camaraderie, but more than anything I love the hard work. Seeing dedication and hard work in my team is bar none. „

EXPERIENCE
2018 - Present
Executive Chef
Tofino Wines
San Francisco, CA
2013 - 2018
Executive Chef and Partner
Tosca Cafe
San Francisco, CA
2010 - 2013
Chef de Cuisine
The John Dory Oyster Bar
New York, NY
2009 - 2010
Executive Sous Chef
The Breslin & Dining Room
New York, NY
2009 - 2009
Chef de Cuisine
The John Dory Oyster Bar
New York, NY
2007 - 2009
Sous Chef
The Spotted Pig
New York, NY
2006 - 2007
Line Cook
The Spotted Pig
New York, NY
2006 - 2006
Line Cook
The Laundry
East Hampton, NY
2004 - 2006
Line Cook
Le Gigot
New York, NY
2002 - 2004
Server
Le Gigot
New York, NY
2002 - 2004
Server
The Odeon
New York, NY
2002 - 2002
Bartender, Server
Alison by the Beach
East Hampton, NY
2001 - 2002
Bartender
Kansai
San Francisco, CA
EDUCATION
2005 - 2005
Grand Diploma in Culinary Arts
International Culinary Center - New York
New York, NY
2001 - 2001
BA, American History & Computer Science
Columbia University
New York, NY
I knew that restaurant cooking was the right profession for me when April promoted me to Sous Chef at The Spotted Pig. Until then, I was still just feeling my way through each and every day. I put my head down and got to work, and wasn't really sure whether I was doing well, just getting by, or absolutely floundering. When April floated the idea that I should take on a Sous Chef role, I was completely caught off guard, but I knew instantly that I wanted the responsibility.
When holding an interview or entertaining a stage in my kitchen, I look for two primary characteristics: a good attitude and work ethic, and a passion for working in a restaurant kitchen. Cooking in restaurants is completely different than catering, or private chef'ing or cooking at home. Cooking in a restaurant kitchen is about the rhythm and motion of service and the ability to repeat the same tasks with absolute consistency in an extremely hot and intense environment. There has to be a desire to work as part of a team and take joy in succeeding as a group. A good restaurant cook or chef has to enjoy the service, not just the cooking.
My mom let me figure out on my own that a strong effort was the only way I was ever going to have any real success. It wasn't until I started cooking that I understood the full force of my mother's advice. I could literally out effort the people around me and that would provide me the opportunity to learn more and gain greater responsibility. I always tell people that cooking is not necessarily difficult work, but it is hard work.
The Spotted Pig will always be my most formidable experience in restaurant kitchens. The Spotted Pig was where I fell in love with comfort food. Before taking the line cook position at The Spotted Pig, I always assumed I would go the way of French fine-dining. I thought that I needed to cook precious food and plate with tweezers and make my way through a brigade of 30 chefs putting out 15 tiny plates for each individual diner, until I accepted the position there. I knew I wanted to cook food that people can and will come back for. I wanted the satisfaction of having regulars who can't go without that one dish for too long. It was at The Spotted Pig where I learned that comfortable casual dining was a legitimate and noble pursuit.