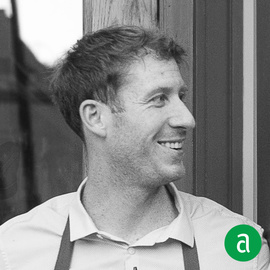 Greg Baxtrom, Chef and Owner of Olmsted and Maison Yaki in Brooklyn, NY shares his career timeline and words of advice for up-and-coming professionals

“The most important quality is eagerness to learn. We want someone who is excited to learn how we do things, and then understand how to contribute. We also look for individuals who want to become reliable and trusted members of our team.„

EXPERIENCE
2019 - Present
Chef and Owner
Maison Yaki
Brooklyn, NY
2016 - Present
Chef and Owner
Olmsted
New York, NY
2015 - 2016
Personal Chef
Private Client
New York, NY
2012 - 2012
Sous Chef / R&D
Atera
New York, NY
2011 - 2012
Opening “Cook”
North End Grill
New York, NY
2010 - 2011
Chef de Cuisine
Blue Hill at Stone Barns
Tarry Town, NY
2009 - 2010
Chef de Partie
Per Se
New York, NY
2008 - 2008
Stage
El Bulli
Spain
2005 - 2008
Sous Chef
Alinea Restaurant
Chicago, IL
2004 - 2005
Production Baker
Flechenstein’s Bakery
Mokena, IL
2004 - 2004
Internship
Auberge de la Valloire
France
2003 - 2004
Chef Assistant
Kendall College
Chicago, IL
EDUCATION
2003 - 2005
Culinary and Hospitality Management.
Kendall College
Chicago, IL
I kind of always had a feeling I wanted to be a chef. I used to watch Rick Bayless and Jaques Pepin on TV - I couldn't get enough of that stuff. My aunt then got me the Jamie Oliver cookbook for my 16th birthday and I started playing around with it; that's when it really started for me.
The one thing I absolutely couldn't do my job without is a scale! Everything at Olmsted, from the recipes to portion size, down to the milk that goes into our hot chocolate, is weighed out. We have scales all over the restaurant.
Keeping our team motivated and inspired really comes down to the fact that we source all of this amazing product, which allows our cooks to work with the best produce, seafood, etc. By changing the menu often, we keeps our team on their toes and always learning. Also, we really take care of our most trusted team members, the ones that show the most promise, whether it's having them be part of an exciting event that we're doing, or arranging for them to travel somewhere cool.
In my position as a restaurant owner, it's important not to be stuck on one particular style of management. You really have to cater to each individual employee and figure out how best to relate to them, it helps to foster the best working relationships.
For me, the most influential books are The French Laundry Cookbook, The Alinea Cookbook, and The Flavor Bible.
I was definitely most impacted by my time at Alinea. Two weeks into starting my internship, the manager quit and Grant asked me if I wanted to do that job. I worked as an intern/manager for a few months, and then at the end of my internship, Grant sat me down and said he really saw promise in me. He asked me to stay on - I didn't even think the possibility of a job was on the table after my internship, so I was floored. Without exaggeration, I skipped down Michigan Avenue three miles to my apartment at 2 am and called my mom (and woke her up) to tell her I was now officially working at Alinea.
I'm not sure if this will make sense to anyone but me, but it really was a pivotal moment in my career. When I was at Alinea back in the day, I walked past John Shields and Curtis Duffy and heard them say "you failed the test." I asked what they meant, and they said I walked by a door that was slightly ajar and didn't close it. It really stayed with me, and to this day, when I walk past a slightly ajar door or just anything that's not quite right in my restaurant, even an upside-down roll of toilet paper in the bathroom, I fix it.
I am driven by wanting to make my parents and mentors, like Grant Achatz, proud. Those people that have invested so much time and energy into me and my career, supporting me when I was working hard to figure out my path, and I want to do right by them.
My inspiration comes from a combination of the Union Square Greenmarket and dining out on a regular basis. I love researching and seeing what people are really responding to, and what's happening in the culinary zeitgeist.