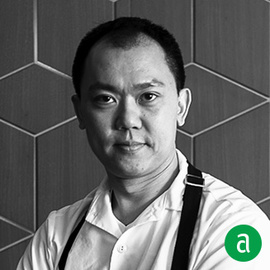 “I always remind myself that I got to where I am today because my Chefs and Mentors constantly pushed, nurtured, and believed in me. I try to pay that forward by making training and mentorship a priority for the cooks on my team. I know firsthand that mentorship can directly impact a cook’s career and although there isn’t instant gratification, there are certainly long-term and enduring results.„

EXPERIENCE
2014 - Present
Chef de Cuisine / Co-Owner
Noreetuh
New York, NY
2010 - 2013
Sous Chef
Lincoln Restaurant
New York, NY
2004 - 2010
Commis, Chef de Partie, Sous Chef
Per Se
New York, NY
2001 - 2003
Chef de Partie
Bouchon
Yountville, CA
EDUCATION
2002 - 2002
Associates Degree in Occupational Science
California School of Culinary Arts - Le Cordon Bleu
Pasadena, CA
1998 - 1998
Bachelor Degree in Arts and Sciences - Japanese Language
University of Hawaii at Manoa
Honolulu, HI
1997 - 1997
Study Abroad Program for Japanese Language
Konan University
Kobe, Japan
There are two anecdotes that have stuck from my time working with Chef Benno at Per Se. He always told me - “If you don’t know how to cook the little fish, how are you ever going to learn to cook the big ones?” He meant that in the literal and philosophical sense of the phrase. The other was a quote from John Wooden “If you don't have time to do it right, when will you have time to do it over?” Never take shortcuts.
Take pride in your work and strive to be better all the time, the results will show in the food that you cook and the way you carry yourself.
I enjoy working alongside my team each day during prep and service because it gives me a lot opportunities and time to teach and nurture. I try to make an effort to explain the vision of a dish or preparation and hopefully they can better see through my eyes what we are working together to achieve.
When I was a cook at Bouchon, my friend Matt Louis (Moxy in Portsmouth, NH) referred me to Chef Jonathan Benno who was training at The French Laundry and was recruiting for the opening team at Per Se. Those couple of days spent at The French Laundry for a position at Per Se were definitely a milestone in my professional career and it was all because of the referral from Matt. It taught me the importance of relationships with people and also how important it is to seize an opportunity when you have a chance.
For nearly just as long as working with Chef Benno, I was fortunate to work with Chef Thomas Keller for about 8 years, first at Bouchon in Yountville, California then at Per Se in New York City. It’s no surprise that Chef Keller instills a sense of urgency in every person that works for him, but beyond that, I learned how the importance of discipline and commitment. Discipline keeps you organized and focused, maintaining that sense of urgency when you work. Chef Keller also taught me the importance of commitment - thinking through decisions and being committed to them, even if, at the end of the day, you were wrong, as long as they were meaningful and well-thought out.
Understanding that everything you do is a work in progress keeps me motivated. If something doesn’t work, we change it. If we had an idea and the outcome wasn’t what we expected, we didn’t fail, we just tested it. We learn lessons, make changes and move forward to test the next version of that idea.
It starts with the premise of humility and camaraderie - knowing that there is always something new to learn from your colleagues. I like to collaborate with other Chefs and talk about everything - from innovative techniques and exciting ingredients and trusted purveyors and new tools. We are fortunate with social media that a Chef can have instant lines of communication to other Chefs, some who may be colleagues and some that they may have never even met in person, to collaborate with.
I worked with Chris L’Hommedieu at Per Se when he was the Executive Sous Chef and I first started as a Commis. It was always important for Chef L’Hommedieu to resolve issues and problems at the end of service and not let them sit and brew. Those times when I had a bad service and struggled to finish, he would always make an effort to talk through the issues and how to resolve them logically and calmly. He always wanted you to finish the night on a positive note. Through the years working with him, he helped me realize there was no greater motivating force that believing in yourself.
There is no other Chef that I have worked longer under than Chef Jonathan Benno of Lincoln Ristorante. I could never begin to enumerate all the lessons that Chef Benno has taught me on how to be not only a better cook, but also a better person. Among all the things, he taught me first and foremost to be humble, loyal and work hard. He exemplifies those three traits to me more than any other Chef does. Chef Benno also showed me that being a Chef goes far beyond just being a good cook, but also being a Mentor, a Manager and a keeper of the Kitchen and all things inside it - from hiring and retaining a staff, to writing a menu to maintaining and servicing equipment.
Disclaimer: Individuals featured in the Inspirational Career Timelines section have been nominated by peers, colleagues and/or other members of the hospitality industry. It is to the best of our knowledge that each individual has demonstrated leadership and acted as a positive role model for others.