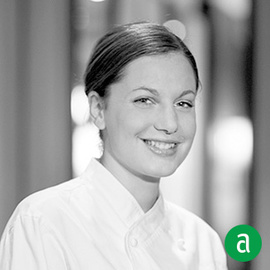 “Going to the Culinary Institute of America, working for Daniel Boulud, and traveling to learn and work at some of the best events and restaurants in the world has really been incredibly inspirational. I feel like everyone around me just cares so much about what they are doing. It makes you realize that you can never stop learning, and no matter what you are working on, it can always be improved or elevated.„

EXPERIENCE
2015 - Present
Executive Chef
Cuisine Solutions; CREA
Sterling, VA
2014 - 2015
Former Executive Chef
Corkbuzz Wine Studio
New York, NY
2007 - 2014
Culinary Manager
The Dinex Group
New York, NY
2008 - 2008
Kitchen Stage
Restaurant Michel Bras
Laguiole, France
2007 - 2007
Sous Chef
CIA Professional Development Trip to Japan (Hosted by US Navy)
Tokyo & Atsugi, Japan
2006 - 2007
Chef de Partie & Garde Manger
Restaurant Daniel
New York, NY
2005 - 2006
Teaching Assistant
Escoffier Room, Culinary Institute of America
Hyde Park, NY
2004 - 2004
Kitchen Extern
Restaurant Daniel
New York, NY
2002 - 2003
Cook, Server
Catoctin Inn and Catering
Buckeystown, MD
2000 - 2002
Server, Prep Cook
Harvest Valley Catering
Buckeystown, MD
EDUCATION
2011 - 2011
Certified in Hazard Analysis & Critical Control Point Writing
Rutger’s Food Innovation Center
Bridgeton, NJ
Graduate of Associates of Occupational Studies, President of the Gourmet Society, Secretary of VICA, Junior member of the American Culinary Federation, Judiciary Board Justice
Culinary Institute of America
Hyde Park, NY
2000 - 2002
Culinary Arts Program (attended in highschool)
Frederick Community College
Frederick, MD
I learned the hard way to wear comfortable clogs.
I think about two specific pieces of advice given to me all of the time. One was from a friend that knew I was going to start my externship at Restaurant Daniel. He told me “Keep your head down, and all you will ever need to say is: ‘Yes Chef!’.” Another one was from Georgette Farkas, our former PR Director, when I first made the transition into the corporate team. Her motto was “Never explain and never complain,” meaning, don’t ever seem like you are making excuses, and complaining is just unproductive and basically just a bad look.
Never doubt your capacity to handle something. It’s better to just dive in and just figure it out.
The most important thing I learned at my first job is to clean as you go.
For me, tough times are mainly tough just because of exhaustion. So I would have to say coffee has helped me through tough times!
Doing my stage at Michel Bras in Aubrac, France was just magical. I learned so many techniques, how to forage, and also a real balanced and supportive way of working. Not to mention the countryside was breathtakingly beautiful.
Daniel Boulud is a great mentor and generally just a great person to have on your side. He really opened so many doors for me and has given me many chances to excel and take on more responsibilities.
My first chef when I was fourteen years old, Robert Remsburg, taught me all of the basics but also how to motivate on my own by timing my tasks. If it took 20 minutes to peel a case of carrots, I would try to do it in 15 the next time.
Disclaimer: Individuals featured in the Inspirational Career Timelines section have been nominated by peers, colleagues and/or other members of the hospitality industry. It is to the best of our knowledge that each individual has demonstrated leadership and acted as a positive role model for others.