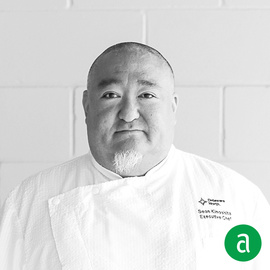 “I am inspired by creating an environment and a culture that promote teamwork, where constructive criticism is taken and run with. Every operation will have food based on what sells. So that part of the operation can’t be changed much as your customers decide what they want. But an environment where people will give their 110% all the time is inspiring.„

EXPERIENCE
2016 - Present
Executive Chef
TIAA Bank Field - Delaware North
Jacksonville, FL
2015 - 2016
Executive Chef
Blue Ridge Restaurants
MD & FL
2012 - 2015
Executive Chef
TAO Las Vegas
Las Vegas, NV
2010 - 2012
Executive Chef
Stockton Seaview Hotel and Golf Club
Galloway, NJ
2008 - 2010
Executive Chef
Harrah's Philadelphia Casino & Racetrack
Chester, PA
2006 - 2008
Executive Chef
Caesars Atlantic City
Atlantic City, NJ
2002 - 2006
Executive Sous Chef
Harrah's Resort Southern California
Valley Center, CA
2002 - 2002
Corporate Chef
Strait’s Café
San Jose, CA
2002 - 2002
Executive Chef
Mid-Pacific Country Club
Honolulu, HI
1999 - 2002
Corporate Chef
Sansei Seafood Restaurant & Sushi Bar
Honolulu, HI
1997 - 1999
Chef de Cuisine
Kapalua Bay Hotel
Kapalua, HI
1996 - 1997
Executive Chef
Sunset Grill
Honolulu, HI
1995 - 1996
Executive Chef
A Pacific Café
Honolulu, HI
1994 - 1995
Lead Cook
Mandarin Oriental, San Francisco
San Francisco, CA
1993 - 1994
Saucier
Lespinasse
New York, NY
1992 - 1993
Poissonnier
Park Avenue Café
New York, NY
1991 - 1992
Tournant Line Cook
Cypress Club Restaurant
San Francisco, CA
EDUCATION
2018 - 2018
Certified Executive Chef
American Culinary Federation
1991 - 1992
AOS Degree in Culinary Arts
California Culinary Academy
San Francisco, CA
1990 - 1991
Culinary Arts Certificate
Northeast Metro Technical Institute
Wakefield, MA
1988 - 1990
AOS Degree in Food Service
University of Hawaii at Hilo
Hilo, HI
I knew this job was right when I was 5 years old. My parents took me to a Vietnamese restaurant and I had cold summer rolls. I remember thinking that this was the best thing I had ever eaten in my life. From then, I became passionate about good food. My parents weren’t very good cooks, but my grandparents would cook traditional Japanese food for the holidays and I always looked forward to those meals.
My most impactful and inspirational internship was at Fleur De Lys in San Francisco, in 1991. They were one of the best French restaurants in the city during that era. The care and plating was amazing to witness: every plate was sprayed with water to clean and put in a salamander to heat. Everyone knew what to do and it was like Centipede, the arcade game. Everyone was moving very fast but with precision.
A piece of advice from one of my directors: think of your employees as an emotional bank account. By spending time to get to know them and their needs is depositing in their account. There will surely be a time where you will need to withdraw some of your deposits and when it happens, it should never be a problem if you deposit accordingly.
One of my Vice-Presidents told me to start having those hard conversations with your staff. That is the only way you will truly be able to hold them accountable.
The most important thing I look for is tenure at an operation and then where they worked. I look for people who stick around and stay for a while. I don’t want to spend time teaching someone who might leave in 3 months.
A good knowledge of the basics and good knife skills are important to possess. I want someone who knows the different techniques (how to saute, braise, deep-fry, etc.) and can apply them.
I keep my team inspired by thinking about the future: being better than we were yesterday or better the next time around. I also teach that making mistakes is okay. People often don’t want to admit when they make a mistake or deflect accusations. I can help you fix mistakes with coaching and training, but you will never get better lying about mistakes. The only way to improve is to be honest to yourself by admitting your mistakes, accepting them and learning from them.
I find inspiration by being independent and responsible. Running my department the way I want operations to be run is freedom and hitting our goals is a win. Like in sport, someone wins and other lose. I always rate our performance and let my chefs know what we need to do to win: winning means happy guests and hitting our projected financial goals.
I can’t live without my chef knives, I have many Japanese knives. Masamoto and Nenox are my go to knives.
I usually read Food Arts and Art Culinaire – these are great publications. Self-help books are also an important aspect of leading, they will teach you the understanding of motivation and leadership.
I do a lot of research on the internet. It may be food items, maybe something that helps by giving us energy (vitamins), or a new way of storing recipes, such as using an iPad in the kitchen. Education may be looking at other cultures and seeing what makes their food or culture great. There is no end to learning.