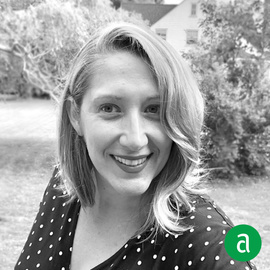 Sam Pogue, Principal of Paper to Table based in New York, NY, shares her career timeline and words of advice for up-and-coming professionals.

“What fuels me is my passion for connecting with the community. I adore the camaraderie of the hospitality industry, the playfulness of food, and the curiosity that motivates the beverage world.„

New York NY
2009 - 2009
Marketing Director
Doghouse Record
New York, NY
EDUCATION
2001 - 2001
Bachelor of Arts in English
McGill University
Montreal, Canada
I launched my culinary event production company, Paper to Table, because I saw a niche in the events space that wasn’t entirely being met. Most events cobble together F&B experiences through a combination of concession management, caterers, culinary schools and production companies – but often they don’t completely overlap, and things don’t quite connect. We help events run efficiently and on budget by bringing the restaurant hospitality sensibility to an environment that has traditionally been results-focused and can sometimes lose track of the guest experience.
The best advice I can give someone is to be calm in the storm. When challenges arise or things fall apart, not only does being calm give the team confidence in your ability to manage the situation but when you are collected and focused, it also mitigates the stress and nervous energy that can otherwise build. Things will always go awry, so I spend a lot of advance time planning for the unexpected, so I can focus on dealing with the inevitable as swiftly and seamlessly as possible. You will be amazed at the positive chain reaction it creates within the team.
Curiosity and fear of being bored have been constant presences in my professional career. Bringing people together around a table, or in the case of paper to table’s bonfire, to share stories and feel taken care of, is one of my favorite things to do. I’m a caretaker and introvert by nature, which makes for an odd combination in hospitality and events, but it somehow works.
Learning as much as you can and then passing that skill and insight on to the next generation is one of my professional and personal goals. This is how you can learn and grow; otherwise, you’re just standing still.
Being detail-oriented, flexible and resourceful will get you very far in culinary event production. Challenges that I’ve had to figure out at one time or another have included figuring out how to source ingredients not commonly available, stretching a budget with zero flexibility, or how to repurpose a tent when vendors cancel last minute.
When hiring, I look for someone who is curious, has a good work ethic and team spirit. Things rarely go as planned, so having people with a collaborative spirit is critical. If someone gets flustered easily, event production is going to be a challenge for them. We are at our best when we come together and solve the unexpected challenges that arise… very similar to being on the line of the kitchen or on the floor of a restaurant.
I empower my team with as much information as possible, so we are aligned on the common goal—they become the best ambassadors of the vision that I could hope for. The adage about treating people the way you want to be treated is 100% true. Being kind, courteous and verbalizing how much you appreciate someone’s efforts will go a long way.
I couldn’t do my job without my laptop and the internet, because prepping and the advance organization is so incredibly vital to thinking to planning and thinking through the process. Though I also think that there’s little that can’t be achieved with gaff tape and zip ties. Those things are pretty amazing expendables to have a stash of.