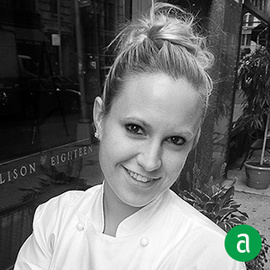 “Don't go in with a chip on your shoulder. So many kids come out of culinary school with this holier than thou attitude, as if they know everything and are ready to be an Executive Chef. Pay your dues. Learn. Respect. Begin to understand the bigger picture.„

Latin School of Chicago
Chicago, IL
I’ve learned by making mistakes–many of them! But that’s how you learn. You F*@k up and you don’t do it again. You get better. It’s important to understand that this is a fluid profession and you are never done learning.
Spring was one of my most amazing externships. It was really the first time I got to learn about fish. Craigie on Main in Cambridge was also great. It was a very old school kitchen. When deliveries came in, every single cook stopped what they were doing and worked together to put everything away.
I learned from my first job to do anything that is asked of you. I also learned how dynamic the kitchen is. I can remember the specific moment I fell in love with restaurants as an intern in the pastry kitchen of Blackbird under Chef Elyssa Narrow. On a very busy night, I witnessed 5 men, on the line, barely talking in the open kitchen, turn at the exact moment and put up 7 plates. I was in awe of the ballet and their awareness and attention to detail.
Staying motivated is something that has to come from within. Do not give up. Do not be a quitter. Put your head down and push harder. It's not easy getting yelled at in front of your peers and being taken down for every small detail. In the moment, you can't see beyond that. Looking back, it's what made me the Chef that I am today and I have been very fortunate to work for such amazing Chefs.
Christian Delouvrier told me something I will never forget about FOH and BOH service. He said that a diner could go to the best food restaurant in the world, with the best chef. But if the service is poor or they don't feel accommodated, they will never go back, no matter how good the food is. You can serve that same diner mediocre food out of any kitchen and if they are made to feel special, appreciated and important, they will come back every time. There is not necessarily a division between the front and back. The two must work in tandem.