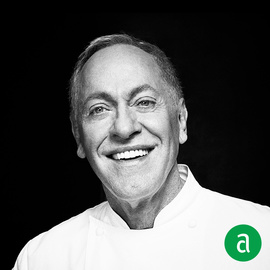 Patrick O'Connell, Chef & Proprietor at The Inn at Little Washington and Patty O's in Washington, VA, shares his career timeline and words of advice for up-and-coming professionals.

“The Inn’s culture emphasizes collaboration. We all work together as a team. Everyone’s input is valued and welcomed. Whoever has the best idea wins and it doesn't have to be mine. I am inspired and energized every day by the youthful enthusiasm of our team. Hopefully, we all learn something from each other every day.„

1992
EXPERIENCE
2021 - Present
Chef & Proprietor
Patty O's
Washington, VA
2015 - 2015
Author
"The Inn at Little Washington: A Magnificent Obsession" Cookbook
2010 - 2017
President
Relais & Châteaux North America
2004 - 2004
Author
"Refined American Cuisine" Cookbook
1996 - 1996
Author
"A Consuming Passion" Cookbook
1978 - Present
Chef & Proprietor
The Inn at Little Washington
Washington, VA
1972 - 1978
Chef
O’Connell-Lynch Caterers
Washington, VA
EDUCATION
2001 - 2001
Honorary Doctorate in Culinary Arts
Johnson & Wales University
Providence, RI
Cooking should be approached with the idea of mastering an art form, similar to learning to play the violin. It requires patience and repetitive practice. I always recommend that a home cook choose one dish to master and make their own. It may require preparing the dish for several years. Each time they make it, it should improve and take less time to prepare. It’s important to find the finest example of the dish they’re trying to replicate and measure their progress against the best in the world. Eventually, they will be capable of mastering the dish and possibly surpassing the best version in the world. At this point, they're ready to move on to mastering another dish.
I was fortunate enough to apprentice under a passionate Frenchman from Alsace who always advised us that if you want to succeed in this business you must put your entire soul into it otherwise you will fail. He taught me the importance of the tiny details which lesser restaurants sometimes ignore, such as the order and cleanliness of the kitchen at all times.
I began my restaurant career at the impressionable age of 15. Once I discovered the intensity of this delicious business I was hooked. More than anything I fell in love with restaurant people.
I believe there are three key attributes to success in the kitchen: 1) A natural or finely tuned palette; 2) An artistic sensibility or flare; 3) An ability to throw your body at the work with a fearless athleticism. If you possess one of these talents you can probably succeed. With two you may be a star. Possessing all three might make you a prodigy. It also helps to have a sense of humor.
We are continually working on new projects and dishes. Currently, we are excited to be opening our second restaurant later this year. It will be a departure from the fine dining at the Inn and will include a bakery and café for our guests to enjoy lunch, dinner, and more casual fare while escaping reality and taking in the natural beauty of the Shenandoah Valley countryside. The café will be called Patty-O’s and feature a bit of something for everyone, a collaboration of traditional French and American cuisine along with reintroductions of some of the classic dishes that have helped to shape and define the Inn at Little Washington over the past four decades.
In the early days of The Inn’s development, we went on annual gastronomic pilgrimages to the great Michelin-starred restaurants of Europe, focusing on those located in remote, small villages like our own. To finally be a recipient of the Michelin Guide's 3 Stars has been the fulfillment of a lifelong commitment to the pursuit of excellence in hospitality and reverence for cuisine. Today, as a member of the wonderful Relais and Chateaux Association we have many opportunities to visit our colleagues throughout the world and exchange ideas. Many members of our team have had a chance to stage at other properties in the Association and we’re frequently hosting someone in our kitchen from another member property.
Currently we have 17 different countries represented among our staff of 178 and are excited to continue growing our Inn at Little Washington family in the Virginia countryside.
Disclaimer: Individuals featured in the Inspirational Career Timelines section have been nominated by peers, colleagues and/or other members of the hospitality industry. It is to the best of our knowledge that each individual has demonstrated leadership and acted as a positive role model for others.