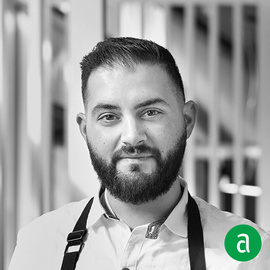 Mike Rafidi, Executive Chef of Requin - The Wharf in Washington, D.C., shares his career timeline and words of advice for up-and-coming professionals.

“The best part of my job is coaching cooks in our kitchen, and guiding them to become chefs. It allows me to be a teacher and it is incredibly inspiring!„

EXPERIENCE
2018 - Present
Executive Chef
Requin - The Wharf
Washington, D.C.
2017 - 2018
Executive Chef
Arroz
Washington, D.C.
2015 - 2017
Executive Chef
RN74
San Francisco, CA
2013 - 2015
Corporate Executive Sous Chef
MINA GROUP
San Francisco, CA
2012 - 2013
Executive Sous Chef
The Mildred
Philadelphia, PA
2011 - 2012
Senior Sous Chef
Wit & Wisdom at the Four Seasons Hotel
Baltimore, MD
2011 - 2011
Sous Chef
Talula's Garden
Philadelphia PA
2008 - 2011
Lead Chef de Partie
Blue Duck Tavern
Washington, D.C.
2007 - 2008
Tournant Junior Sous Chef
Hyatt Grand Cypress
Orlando, FL
2006 - 2007
Chef de Partie
The Duquesne Club
Pittsburg, PA
EDUCATION
2006 - 2006
Culinary Arts
Pennsylvania Culinary Institute
Pittsburg, PA
2005 - 2005
Hospitality Management
Youngstown State University
Youngstown, OH
My stage at Noma was the most impactful two months of my career. Putting my head down and understanding the philosophy, and learning how to a work really well with a team, where we worked as one, was eye opening!
I knew very early that I wanted to be a chef. When I was a child, I was always in the kitchen. My grandmother was a chef, and I would cook with her all the time. I debated being a lawyer for about 4 months but that didn’t last very long.
Cooking is such a small part of the puzzle of being a chef. Finding people who want to work with you and learn from you is more important, and getting them excited about what we do and being a part of our team.
Two books that I highly recommend to have on hand are “Spice companion: a guide to the world of spices" by Lior Lev Sercarz, and "The Art of Fermentation" by Sandor Katz.
I like to go on trips to the farmers markets with my team. I find this gets them as excited about the seasonal ingredients as I am, and helps us find inspiration for menu development. I want them to be as much a part of the menu development as possible!
When hiring, I look primarily for a positive attitude. I think it's more important than their skills. Every kitchen is a little different so being flexible and having the passion to learn is key to helping us build a solid team.
Disclaimer: Individuals featured in the Inspirational Career Timelines section have been nominated by peers, colleagues and/or other members of the hospitality industry. It is to the best of our knowledge that each individual has demonstrated leadership and acted as a positive role model for others.