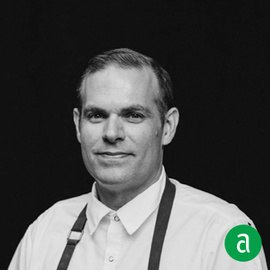 “It’s a simple mantra that I came up with several years ago and it continues to drive me today! ‘There is under cooked, there is over cooked and there is perfectly cooked. We are shooting for perfectly cooked every day.’„

EXPERIENCE
2013 - Present
Vice President of Culinary
Rocket Farm Restaurants
Atlanta, GA
2011 - 2013
Consulting Chef
Jucy's Hamburgers
Tyler, TX
2008 - 2011
Executive Chef
Craft Atlanta
Atlanta, GA
2006 - 2008
Executive Chef
Craft Dallas
Dallas, TX
2005 - 2006
Sous Chef
The Oak Room
Louisville, KY
2003 - 2005
Apprentice Baker
Blue Dog Bakery
Louisville, KY
1999 - 2003
Chef de Partie, Tavern Room Chef, Sous Chef
Gramercy Tavern
New York, NY
1997 - 1999
Chef de Partie
Rover's
Seattle, WA
1995 - 1997
Chef de Partie
The Riviera
Dallas, TX
EDUCATION
1994 - 1994
BA in Business Administration & Marketing
Texas Christian University
Fort Worth, TX
Michael Weinstein, the man who set the tone for my career, hired me for my first real kitchen job at The Riviera in Dallas, TX. I had tons of fluff on my resume that I thought would help me get my foot in the door for the #1 Zagat rated (the only rating that mattered in 1994!) restaurant. A conversation we had one day still stays with me. He said to me, "Do you know why I hired you?" I was still so naive and thought, though I did not dare say out loud, "because of all of the awesome 'relevant' experiences I had on my resume?" He said I hired you because: "you were dressed nice for the interview and that showed me you cared about getting the job, you had a college degree and that showed me you cared about doing something with your life, and most importantly, I hired you because you had absolutely zero experience and I knew that I could teach you to do everything the right way from the beginning." To this day I use that conversation to guide my hiring decisions.
Tom Colicchio once said to me in his office,"If a cook does not understand what we are looking for in a dish or technique, then shame on us. If a cook does understand that but fails to deliver, then shame on them." – Simple and to the point!
Culinary school to me is about learning the vocabulary and being exposed to the fundamentals of cuisine; it was a very worthwhile investment. However, you don't learn how to butcher a salmon by watching an instructor do it on stage, you don't learn how to do it in a classroom "lab" with three other students all sharing the same fish and getting to make some knife strokes, you don't learn how to butcher a salmon by working the fish station at the local 2 star restaurant butchering 2-3 fish a week; you learn how to butcher a salmon by moving to Seattle, getting a job at the busiest seafood restaurant in town & butchering 2-3 cases of salmon every day for 6 months! Complete submersion in the craft is the key. Cooking is all muscle memory. Filleting a wild King Salmon in 5 knife strokes and its as fluid as casting an 8 weight on South Andros.
Disclaimer: Individuals featured in the Inspirational Career Timelines section have been nominated by peers, colleagues and/or other members of the hospitality industry. It is to the best of our knowledge that each individual has demonstrated leadership and acted as a positive role model for others.