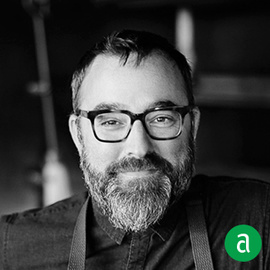 Josh Henderson, Chef and Founder of Huxley Wallace Collective in Seattle, shares his career timeline and advice for up-and-coming talent.

“I want someone that is positive, and genuinely has a good outlook on things. Someone that can withstand the unknowns of the restaurant world, and is able to adapt quickly. Someone who cares about the environment they are in, their team and the cleanliness of the restaurant. Lastly, they must be respectful; over the years, this has become 1000 more important than what’s on your resume. „

EXPERIENCE
2013 - Present
Chef and Founder
Huxley Wallace Collective
Seattle, WA
2007 - 2013
Chef and Founder
Skillet Street Food
Seattle, WA
2007 - 2007
Chef Instructor
The Art Institute of Seattle
Seattle, WA
2006 - 2006
Corporate Executive Chef Consultant
RHI Solutions
Seattle, WA
2004 - 2007
Photo Shoot Catering Chef
Josh Henderson Catering
Los Angeles, CA
2003 - 2004
Chef de Cuisine
Blue on Blue Restaurant at the Avalon Hotel
Beverly Hills, CA
2003 - 2003
Executive Consulting Chef
Rosario Resort & Spa
Eastsound, WA
1999 - 2002
Executive Chef
Aramark / Classic Fare Catering
Seattle, WA
1999 - 1999
Director of Culinary Operations
Europa West
Seattle, WA
1998 - 1999
Wine Sales Rep
Grape Expectations
Seattle, WA
1996 - 1998
Owner
Josh Henderson Catering
Seattle, WA
1997 - 1998
Maitre D
Belvedere Mansion
Staatsburg, NY
EDUCATION
1998 - 1998
Culinary Arts Management
Culinary Institute of America
Hyde Park, NY
1996 - 1996
BA in Music
Western Washington University
Bellingham, WA
My team needs my feedback more than anything. We need to be connected as much as possible, so I can try to connect as much as I can, even if it’s popping in for 5 min. I’ll jump on the line to help plate, or help run food if that’s where they need me the most. I want them to know that I am there to be their support and to help them be as awesome as they can be!
My dad always said “people do what you inspect and not was you expect”. People want to be checked up on. I let my team discover and develop themselves, but am also very involved with their growth. I like to jump in and show them new techniques but also like for them to be self-motivated.
Two things I cannot do my job without is my team and having a blast doing what we do!
Certain skills that are key in this industry are hard work, that goes without saying. But also curiosity and the constant drive to learn something new every day.
Always try to work with people you like and can learn from.
I’m a visual person so I get inspiration through Instagram. I tend to pay attention to what people like David Chang and others are up to; they are out and stirring things up and I like that
When I was an undergrad in Music School, I knew I needed to make a switch. I had worked in restaurants since I was 14, so I decided to leave Music School and go to CIA Hyde Park. Music just felt more subjective than food, and I never had the opportunity to go to a big school until then. I knew this was my one chance for me to prove to myself that if I put my mind, passion and energy into culinary school, I’d succeed. The energy of working in a restaurant was also a real motivation for me, but it wasn’t until I completely immersed myself that I was truly inspired by food, every single day.
Disclaimer: Individuals featured in the Inspirational Career Timelines section have been nominated by peers, colleagues and/or other members of the hospitality industry. It is to the best of our knowledge that each individual has demonstrated leadership and acted as a positive role model for others.