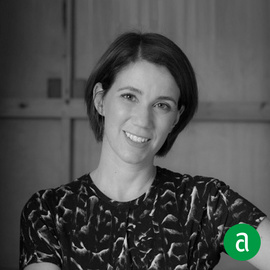 “Throughout my career, I have learned that relationships are everything. They say, “Culture eats strategy for breakfast,” so I work hard to ensure that the companies that I run have a people-first culture and that I treat everyone with warmth and respect.„

EXPERIENCE
2019 - Present
Managing Director
Daily Provisions
New York, NY
2008 - 2019
Founder and Chief Executive Officer
Hot Bread Kitchen
New York, NY
2005 - 2008
Program Manager
Human Rights Education Associates
New York, NY
2003 - 2004
Population Division Consultant
United Nations Department Of Economic And Social Affairs
New York, NY
2001 - 2002
Professional Consultant
United Nations Development Programme
San José, Costa Rica
2000 - 2001
Landmine Ambassador
Canadian Department Of Foreign Affairs
Toronto, Canada
EDUCATION
2004 - 2004
Master of Public Administration: Public Management Degree
Columbia University School Of International & Public Affairs
New York, NY
2001 - 2001
Certificate in Refugee Studies
York University Centre For Refugee Studies
Toronto, Canada
2000 - 2000
Bachelor of the Arts in Latin American Studies and Fine Arts
University of British Colombia
Vancouver, BC, Canada
I don’t think that I have ever had a job that hasn’t significantly impacted me as a professional. From my babysitting job where my boss made the most phenomenal hummus (I didn’t know that hummus could taste so good), to Gap Kids at the mall when I was 16 (I still can fold baby jeans—and napkins—like nobody’s business), to working at the United Nations in Costa Rica where I learned the importance of detailed consistency, I have taken something away from each job. However, the most formative career move came as I pulled all of that together and launched Hot Bread Kitchen. It is truly something amazing to have the opportunity to have a big idea—a vision fueled by impact—and grow it to a sustainable, stable, and thriving institution.
As the mother of two young children with a demanding job, and my life is an organized chaos of work/life with the balance tipping between work and life every day. I try to keep a sense of humor about it and celebrate when things go well at work or home.
As managers, we should hire the smartest, most talented, and phenomenal people we can find. I always want to hire people who are better than I am at things. Integrity and the willingness to make and own mistakes are also essential qualities. It is also good to hire funny people - a sense of humor makes work more fun!
Overseeing Daily Provisions gives me plenty of delicious food to enjoy, but my main motivation is really about growing a business that is robust enough to create a lot of good jobs for people.
You never really know where you’ll get inspiration for your next project. I read a lot to stay inspired. I try to balance a combination of business literature (I recently read Howard Schultz’s first book and Seth Godin’s Tribes), current events (I read the New Yorker on the train), and fiction (I am currently reading the Female Persuasion by Meg Wolitzer). I also read a lot of cookbooks even though I rarely have time to cook anything new.
Organization, routine, and running shoes to get between meetings quickly are all key.
Disclaimer: Individuals featured in the Inspirational Career Timelines section have been nominated by peers, colleagues and/or other members of the hospitality industry. It is to the best of our knowledge that each individual has demonstrated leadership and acted as a positive role model for others.