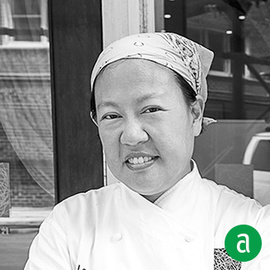 “I learned the hard way, on many levels, how to cook. I worked for about two and a half years as a Cook, was never a Sous Chef, and then became an Executive Chef.„

EXPERIENCE
2000 - 2017
Owner / Executive Chef
Annisa
NYC, NY
2005 - 2010
Co-Founder / Chef
Rickshaw Dumpling Bar
NYC, NY
1995 - 1997
Executive Chef
Mirezi
NYC, NY
1993 - 1994
Executive Chef
Maxims
NYC, NY
1993 - 1993
Executive Chef
Can
NYC, NY
1991 - 1992
Line Cook (all stations)
Chanterelle
NYC, NY
1990 - 1990
Internships
Michel Rostang, Bistro L'Etoile, L'Espadon
Paris, France
1988 - 1989
Garde Manger
Bouley
NYC, NY
EDUCATION
1997 - 1997
Grand Diplome
Ecole de Cuisine La Varenne
Paris, France
1990 - 1990
Grand Diplome
Ecole de Cuisine Ritz Escoffier
Paris, France
1988 - 1988
French Language Degree
Columbia University
NYC, NY
The best advice I received was to taste everything. David Waltuck taught me that.
I consider David and Karen Waltuck my restaurant parents. My partner, who started Annisa with me, worked with them as well. They taught me the importance of a good staff meal - How it brings together the front and back of house as a team and as a family and how it shows respect for food, in general, and respect for your employees--all invaluable.
My first job was at Bouley. He was farm-to-table way before the trend. I learned the importance of pristine ingredients, handled with care.
The food has kept me motivated in tough times related to work. Great food never lets you down. In all bad times, a stellar meal lifts me up.
My most memorable externship was when I worked briefly at Michel Rostang and his Bistro D'a Cote in Paris. I just recently made some foie torchon with a langoustine running through the middle, like they had at Rostang, for Christmas gifts. The food, even the staff meals, was very memorable. I had sheep testicles at the bistro, which were fantastic. For staff meal, we had a sac of salmon eggs that one of the Japanese cooks had saved. There was even the rare female cook, on the hot line at Rostang, who was treated as an equal, as far as I could tell.
I wish I had known 10 years ago to take better care of my body. This career can be grueling.
Disclaimer: Individuals featured in the Inspirational Career Timelines section have been nominated by peers, colleagues and/or other members of the hospitality industry. It is to the best of our knowledge that each individual has demonstrated leadership and acted as a positive role model for others.