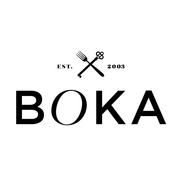 Boka Restaurant is looking for dedicated line cooks.
Candidates must work well with others, have a sense of urgency, and enjoy preparing thoughtfully created food. We emphasize a diverse and collaborative working environment that allows our whole team to grow and learn together.

Boka Restaurant Group offers competitive pay, sponsored Health Insurance, Dental, Vision, and other supplimental insurance. All employees receive a dining discount in any of the group's amazing restaurants, and our company focuses on internal promotion to build our teams! If you are looking to take the next step in your career and want to work in an envrionment that cares about their team and future, then we want to meet you.
Serious applicants only.  Attach resume in email.  No phone calls please.

Over the past 12 years BOKA has become one of Chicago's most beloved restaurants. Chef Lee Wolen's seasonal American food is framed by timeless design located in the heart of Lincoln Park.

Boka originally opened in 2003, and was the first Boka Restaurant Group property for owners Kevin Boehm and Rob Katz. The restaurant became the foundation for the company: An alchemy of great design, warm hospitality, and amazing Chefs. The restaurants rich history includes 6 consecutive Michelin Stars.