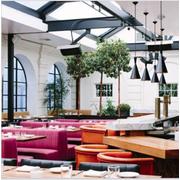 REDBIRD RESTAURANT IS LOOKING FOR A LINE COOK TO JOIN OUR TEAM.  NOT SURE WHAT STATION YOU WILL WORK.  DEPENDS ON SKILL AND FIT.  WE HAVE A GREAT CREW OF 3 CHEFS AND LOTS OF TALENTED LINE COOKS TO ASSIST YOU IN GETTING STARTED.  PLEASE EMAIL US YOUR RESUME AND LETTERS OF RECOMENDATIONS.