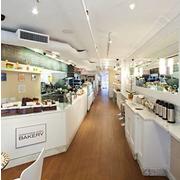 Full-time positions are available immediately for: Pastry Cook
You will be working with a top-tier team in a professional and creative environment. This position is perfect for someone who wants to get his/her foot through the door and pursue a long-term career in the F&B industry and pastry. We believe in promoting education among our team and building strong and solid techniques and foundation. You will learn a great deal while here and work directly with Chef Dominique.
Job Description:
• Daily production for all dessert items, including but not limited to viennoiserie, pastries, and ice creams
• Assist in production, including organization and cleanliness of dried storage, walk-ins, and dairy fridge
• Assist with menu testing and recipe development
• Daily quality checks of products
• Accepting of deliveries
• Attend certain outside events and programs