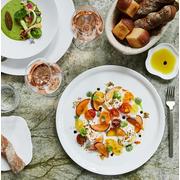 The Restaurant Manager  will assist the Director of Restaurants in organizing the activities of the service team in order to maintain the highest company standards of food & beverage quality and service. This individual will focus most of their time on the dining room operations to overview the service staff and ensure that iour guests receive the best quality of service per concept standards.
As a Manager you will support in training and leading staff, achieving sales objectives, guest service & satisfaction, food quality, cleanliness and sanitation, all while creating a positive work environment.
YOUR RESPONSIBILITIES:
The job description isn’t meant to be a complete list of your qualifications or all the things you’ll do.
YOUR QUALIFICATIONS:
Invest Hospitality is an Equal Opportunity Employer and does not discriminate against applicants due to race, ethnicity, gender, sexual orientation, veteran status, or on the basis of disability or any other federal, state or local protected class.

Part of The Bastion Collection

Le Jardinier is a modern vegetable-driven restaurant created by Michelin-starred Chef Alain Verzeroli, longtime protégé of legendary French chef Joël Robuchon, who also trained under Alain Passard at Arpège and Guy Savoy at Taillevent in Paris. The team includes Executive Pastry Chef Salvatore Martone, who worked with Robuchon for 13 years at Restaurant Joël Robuchon in Las Vegas as well as L’Atelier de Joël Robuchon in New York, and Head Baker Tetsuya Yamaguchi, who worked with Robuchon for over 20 years at his restaurants around the world. Designed by award-winning French architect Joseph Dirand, the restaurant is situated in the new luxury condominium 100 East 53rd Street, developed by Aby Rosen, and designed by Pritzker Prize-winning architect Norman Foster. Le Jardinier (the French word for gardener) will feature approachable yet refined vegetable-driven dishes, rooted in classic French technique. Chef Verzeroli has created a menu where plants play a prominent role: local, seasonal fruits and vegetables, fresh herbs, and greens are complemented by fish, meat and poultry. The menu also features several vegetarian and gluten-free options.