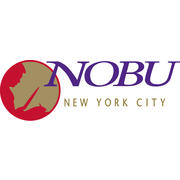 Please email your cover note and resume with "Restaurant Facility Manager" in the Subject Line. Please include a cover note.
Please no photos. Resumes with photos will not be accepted. EOE

Nobu New York, the flagship restaurant of Chef Nobu Matsuhisa, has been a pioneer for Japanese cuisine since its opening in 1994. Nobu partnered with restaurateur Drew Nieporent and Oscar-winning actor Robert De Niro to bring his modern Japanese cuisine to Tribeca. Nobu draws upon his classical training at sushi bars in Tokyo and his life abroad in Peru, Argentina, and around the world to create a whole new trend in Japanese cuisine. The resulting dishes, including Yellowtail with Jalapeno, Tiradito Nobu Style, Lobster with Wasabi Pepper Sauce, and Black Cod with Miso, make Nobu the innovator of new style Japanese food.

Nobu New York's design by architect David Rockwell evokes the beauty of the Japanese countryside with its natural textures, birch trees, wood floors and a wall made of river stones. Energy and excitement pulse through the room, creating a surreal effect. The restaurant received three stars from the New York Times and a Michelin star. The restaurant's