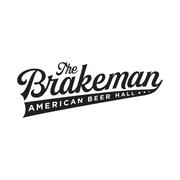 The Brakeman is an American beer hall featuring rotating drafts of craft beers from the Midwest while serving up buckets of fried chicken honey-butter biscuits, and local farmstand sides from the adjoining fried chicken spot, Penny Red’s.

Our downtown hangout is stocked with big screen TVs, foosball, table shuffleboard, and beer pong, with garage doors that open into Parker’s Alley and Farmer Street in the warmer months.