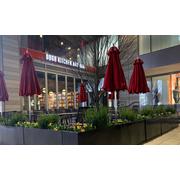 The Dinex Group, the restaurant group of internationally acclaimed Chef Daniel Boulud, is looking for a Host/Hostess for the reopening of our Washington D.C. location.

He/She is the first and last point of contact with the guest and is responsible for greeting, seating and saying goodbye to guest as well as maintaining the flow of the restaurant during service.

Essential duties include: take and confirm reservations over the phone, retrieve messages and return phone calls in a clear, concise and accurate manner.

The host(ess) will report directly to the Maitre d’Hotel and General Manager. The ideal candidate will have at least 1 year experience as a host/hostess and knowledge of Open Table & Resy.

We are looking for an individual who is passionate about hospitality. If you are interested in the opportunity to be part of that growth within an organization who values you, and that recognizes your dedication and hard work, we welcome you to apply!

Part of The Dinex Group, the Restaurant Group of Chef Daniel Boulud