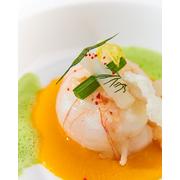 We are looking for a Pastry Sous Chef to join the Le Bernardin team! The ideal candidate will be well-versed in pastry preparations and service with high emphasis on consistency and quality.

Job Summary: The Pastry Sous Chef will be responsible for the preparation and execution of all desserts and other baked goods and will assist in overseeing the overall running of the pastry kitchen, cleanliness and organization. DOH Certification is required and high organizational skills are favored.

Inspired by the triumph of Le Bernardin in Paris and its many American clients, the Le Cozes sought to open a Le Bernardin in New York in 1986. In no time, Le Bernardin became a four star restaurant which is renown for setting standards in the cooking of seafood in America. After the unexpected death of her brother Gilbert in 1994, Maguy Le Coze began working closely with Chef Eric Ripert, a disciple and close friend of Gilbert, who took over the kitchen, and along with Le Coze continued to uphold Le Bernardin’s position as one of the world’s premier restaurants.