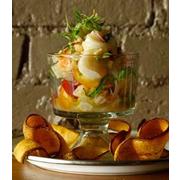 Lolita, the modern Mexican restaurant from the owners of Barbuzzo, Little Nonna’s, Bud & Marilyn's in Philadelphia, is currently seeking a talented + driven Chef de Cuisine who is passionate about Mexican cuisine + street food. You must have a progressive culinary background with experience in regional Mexican cuisine, ingredients, dishes, sauces and flavors.

Qualified candidates will have: 2-5 years of experience as Sous Chef in a well-rated, high-volume restaurant. You will be responsible for mentoring a cohesive BOH team and managing the BOH daily operations. Experience hiring, training, scheduling, managing and leading a team.

We are a growing restaurant group looking for inspiring, creative and talented chefs to become part of our expanding team!

Save
Posted 13 days ago
Executive Chef
The Racquet Club of Philadelphia
Full Time • Salary (Based on Experience)
Philadelphia, PA • Recreation

Lolita is a Modern Mexican Restaurant located in Philadelphia in Midtown Village. Originally opened in 2004 by restaurateurs Chef Marcie Turney and Valerie Safran, it underwent a major renovation in 2014 and reopened with a fresh look, a new Mexican street food-inspired menu and a full liquor license.

Chef Turney and Safran have been working since 2002 to help reinvent 13th Street. The pioneering duo’s eight restaurants and boutiques between Chestnut and Locust Streets have helped transform the once-desolate neighborhood into trendy Midtown Village. Safran is the buyer for all products carried in both boutiques and also serves as general manager for the restaurants. As a team, she and Chef Turney are hands-on entrepreneurs who take genuine ownership of every aspect of their businesses, from the look and feel of the spaces to the products and menus that they offer to the service standards of the staff.