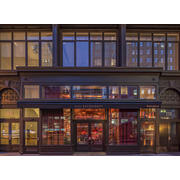 As the premier institution of Lebanese food culture and hospitality values in the US, ilili has built its reputation sharing the elevated cuisine of Philippe Massoud with New Yorkers. ilili is the city’s go-to restaurant for sophisticated Lebanese cuisine, and with its acceptance at the upper echelons of New York’s dining scene has achieved world renown. Located on 5th avenue just north of Madison Square Park and south of the Empire State building, ilili is a vibrant, bustling meeting point of New York savvy and Lebanese generosity.

We’re hiring an experienced line cook for a full time position to help the BOH team ensure that standards are maintained at a superior level on a daily basis.

What you can expect:

We are looking for team members that want to nurture and work in a positive work environment.

We are committed to work life balance approach, and try to schedule our leadership teams with that in consideration.

We want you to excel at leading our teams, and elevate our service standards.

We will give you the tools to do your job to the best of your ability, and provide you with data visibility that will allow you to do so efficiently.

We expect you to maintain integrity of service, visit tables while on the floor to solicit feedback, help on the floor when necessary.

Please submit a copy of your resume and a brief cover letter introducing yourself.

Qualified applicants are considered on the basis of their ability and job related qualifications and without discrimination based on race, creed, color, religion, sex, national origin, marital status, sexual orientation, age, disability or any other classification prescribed under applicable federal, state or local law.

The story of ilili is embedded in a rich heritage of Lebanese cuisine and hospitality, dating back over 100 years and covering three generations of the Massoud family. A story that begins inside the walls of Beirut’s most iconic hotel and finds its way to the bustling streets of NYC.

Executive Chef & Owner Philippe Massoud and brother/co-owner Alex grew up in Beirut’s Coral Beach Hotel, started by grandfather, Alexander and passed down to father, George. This was Lebanon’s Golden Age, and the Coral Beach was Beirut’s social and cultural hub. It was here that Philippe first developed an interest in food, studying under the hotel’s head chef, and learning the nuances of regional flavors and elevated hospitality.

Philippe and Alex were forced to flee the Lebanese civil war as young teens, leaving their country, family and friends behind to settle in the U.S.. Yet despite the distance, Philippe’s love for the food culture of his homeland grew only stronger, a yearning exacerbated by the poor quality of the Lebanese food on offer.

Soon a clear vision emerged – one where Lebanese food gained the recognition it deserved, and sat alongside the world’s great cuisines as a true equal.

Lebanese cuisine is a sensory experience; an invitation for people to join your table to celebrate. It is about bringing people together around a shared theme of love, celebration, generosity, and care. This is the essence of ilili.