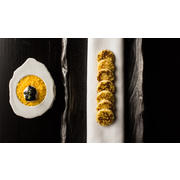 ** Michelin starred Acadia is looking for passionate, driven individuals to add to the culinary team. Candidates must have a willingness to learn, strive for excellence, and minimum 2 years experience in a high end environment. Serious inquiries only. An interview and a one or two day stage is required first to be considered.

In 2010, Chef Ryan McCaskey began planning on fulfilling his lifelong dream of opening his own restaurant. In 2011, this dream became a reality and has since garnered accolades locally and nationally, including a Michelin One Star-rating after just 10 months, a Michelin Two Star-rating in 2015, a 2012 Jean Banchet Best New Restaurant Award, and Four Stars by Chicago Tribune’s Dining Critic Phil Vettel in 2016. Inspired by his time spent in Maine since childhood, Chef McCaskey pays homage to the serenity and abundance found across the state. Many of the subtle nuances and details within the restaurant have touches of Maine throughout. Chef also sources much of the products found on Acadia’s tasting menus directly from the Deer Isle area, specifically Penobscot Bay and islands surrounding.

Since its launch, Acadia has strived for excellence in many areas. Acadia is dining at its finest, tucked away in the up and coming South Loop of Chicago. (312) 360-9500