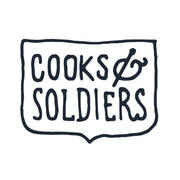 Cooks & Soldiers is looking for passionate and driven individuals for a server assistant role. This person must thrive in a high volume setting. Compensation is hourly plus tips.

The name Cooks & Soldiers is inspired by the annual Tamborrada festival of San Sebastian, Spain. Tamborrada happens every year on the 20th of January (the feast of Saint Sebastian). At midnight, in the Konstituzio Plaza in the "Alde Zaharra/Parte Vieja" (Old Town), the mayor raises the flag of San Sebastián. For 24 hours, day and night, the entire city is awash with the sound of drums. The adults, dressed as cooks and soldiers, march in different companies across various parts of the city with different schedules. The celebration finishes at midnight when the city flag is lowered at various locations, while the main meeting point remains the Konstituzio Plaza.