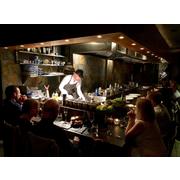 Ukiyo (translated literally as “the floating world” – living in the moment, detached from the bothers of life) seeks to present a culinary workshop or atelier, connected by a tiny walkway to our Michelin starred Jewel Bako Sushi, just next door. The Chef, Marco Prins, is a Dutch native who spent four years at the Chef’s Table at Brooklyn Fare, as well as at Oud Sluis in the Netherlands. Other cooking travels took him to ‘t Zilte in Belgium and Martin Berasategui in San Sebastian. The menu is French at its base, with Japanese and global inflections. Open kitchen. 18 seat bar. Dinner only, open 5 days - closed Sun and Mon.