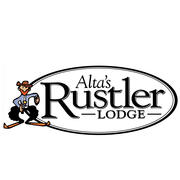 The lodge at night

Long before people came to Alta in search of “the greatest snow on Earth”, they came to mine silver. Alta’s first mining claim was staked in 1865 and by 1872 Alta had become a booming town of 8000 residents. (See the sketch in the dining room near table #81) However, due to economic problems, water in mines, expensive smelting and the demonetizations of silver, the town was nearly deserted by 1880.

In 1938 the first Collin Ski Lift was constructed out of pieces of an unused mining tram. The land was donated to the Forest Service by George Watson (the first mayor of Alta) who predicted, “Alta will be reborn on skis”

The original Rustler Lodge was built by Howard Stillwell and Sverre Engen. Stillwell was born and raised in Alta in the late 1800’s. Engen came over from Norway with his brother Alf, the world-famous skier and founder of Alta’s Ski School

The Rustler is built on the site where the Alta General Store once stood. The land is ideal as it is the only “avalanche-free” area in the Town of Alta (incorporated in 1970)

The lodge opened for business in 1947 with one floor of guest rooms and in 1954 it was purchased by Lee Bronson. In 1955 a second floor was added above the kitchen area (see photo outside of exercise room) and an additional 15 rooms were added in 1963 below the present dining room. Before the dining room opened in 1969, Lee Bronson and Bob Hoskins pioneered Alta heli-skiing from a heli pad located on the very spot where Rustler guests now dine!

Jeff Anderson purchased the lodge in 1976. The Lodge continued to grow in 1973 with the addition of 24 deluxe rooms, conference and sauna facilities. In the following year, the original pool was built. A Jacuzzi was added in 1978.

Additional rooms were built for employees in 1989, along with 2 new bathrooms.
Most employees reside in rooms that were old guest rooms in the original wing of the Rustler. (The old Rustler store was originally the front desk and the stairs to the original employee wing once went to the road – the Service Area once served as the dining hall with one long table and 2 benches for the guests to dine “family style”)

In 1998 the owners, Lee Bronson and Jeff Anderson continued to enhance the Rustler’s “tradition of excellence”. They added 30 luxury rooms, the Eagles nest lounge with commanding views of the ski area, an exercise room, a new Jacuzzi, pool and steam room.

The summer of 2013 brought additional improvements to enhance our guest’s experience. 2 new jacuzzis (one indoor/one outdoor), a sauna, additional bathrooms, and changing facilities are also included in the new space. 3 new spa rooms will replace the old Jacuzzi: including a dedicated manicure/pedicure room. 4 additional deluxe guest rooms have been built on top of the existing steam room and pool bathroom area. This also widened our ski exit area for less congestion.

During the summer of 2017 four additional deluxe rooms were added on to the original wing of the lodge. These rooms have great views of the Albion area! Additional lodge manager rooms were also added at this time.

The original guest rooms in A wing were renovated in the summer of 2018.