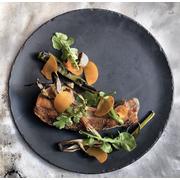 Looking for an experienced part time host to work with our dynamic team at Upland. Duties include but are not limited to: managing guests' reservations and requests, maintaining the flow of the dining room, serving as a liason for STARR Restaurants.

Host will be responsible for greeting and seating guests, completing reservation confirmations, and/or fulfilling projects for management.

Great pay, tremendous growth opportunities, heath care after 90 days and employee dining discounts in over 30 of our STARR Restaurants.

Justin Smillie and the open kitchen

Named after the West Coast town that laid the groundwork for chef Justin Smillie’s lifelong love of cooking, STARR Restaurants’ Upland is a beacon of stunning California-inspired cuisine in the bustling heart of New York City.

Born and raised in San Bernardino County, Smillie has long hoped to translate the ingredients, flavors and techniques of contemporary California cooking to a polished East Coast setting. After years of impressive success in the Big Apple, including a three-star review from the New York Times during his time at Il Buco Alimentari, Smillie earned the opportunity to open his dream restaurant.

Built around a culinary philosophy that takes heavy cues from the seasons, Upland balances a familiar rusticity with a smart global approach and a New Yorker’s eye for detail. The menu offers an artful array of starters, entrees and sides, each plate accented with Smillie’s enticing and urbane touch. The wine program matches the excitement coming out of Upland’s open kitchen, with a worldly 500-bottle list and a clever by-the-glass selection that’s remarkably food-friendly.