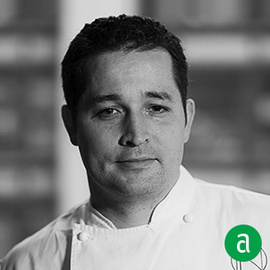 James Kent, Partner & Executive Chef at The Restaurants at 70 Pine in New York City, shares his career timeline and advice for up-and-coming talent.

EXPERIENCE
2018 - Present
Partner and Executive Chef
The Restaurants at 70 Pine
New York, NY
2014 - 2017
Executive Chef
The NoMad
New York, NY
2007 - 2013
Chef de Cuisine, Sous Chef
Eleven Madison Park
New York, NY
2010 - 2011
U.S. Candidate for Bocuse d’Or - 1st in the Bocuse d’Or USA Competition 2010, 10th in the World 2011
Bocuse d'Or
U.S. and Lyon, FR
2006 - 2007
Junior Sous Chef
Gordon Ramsay at the London
New York, NY
2003 - 2006
Line Cook
Restaurant Jean-Georges
New York, NY
2001 - 2003
Tournant
Babbo
New York, NY
1993 - 1993
Apprenticeship
Bouley
New York, NY
1992 - 1997
Line Cook, Prep Cook, Busboy
Pietrasanta
New York, NY
EDUCATION
2001 - 2001
Summer Abroad Program
Le Cordon Bleu
London/Paris
1997 - 2001
BA Food Service Management, Associates in Culinary Arts, Associates in Marketing
Johnson & Wales University
Providence, RI
Daniel Humm, my mentor, taught me the value of hard work as applied towards a realized goal. You need to put your mind to something and you need to be focused. The what and the why matter just as much, if not more, than the how.
I was interested in food from a young age. When I was 14 years-old, David Bouley moved into my building. My mother made me knock on his door and ask to spend some time in his kitchen. It worked and got me an apprenticeship at Bouley for the summer in 1993. While it was an incredible time for me because everything was so new, looking back and reading about what was happening in the culinary scene of New York in the early 90s, I feel so fortunate to have started in such an important time in American (and New York) cuisine. Chef Bouley and other chefs were starting to take a cue from Asia, breaking out of the traditional French mold; there were so many exciting new flavors, techniques, and ideas. But what did I know? I was a kid. I was just in the right place at the right time.
I always want my team to feel ownership over the restaurant. When I was a young cook, the restaurants I worked at felt like my own. This allowed me to really immerse myself and take ownership. I want the entirety of my team to contribute. I don't lead by fear. I lead by example and by trying to create an environment where not being excellent is simply is not acceptable.
The one thing I couldn't live without is my spoon. I taste my food, all day long. From the building blocks of our recipes to the moment it goes out to the guest, I am always tasting. It's one of the biggest lessons I try to instill in my younger cooks.
Disclaimer: Individuals featured in the Inspirational Career Timelines section have been nominated by peers, colleagues and/or other members of the hospitality industry. It is to the best of our knowledge that each individual has demonstrated leadership and acted as a positive role model for others.