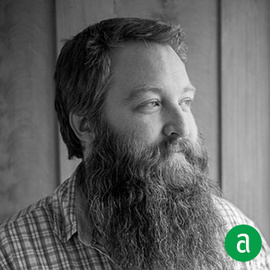 Erik Desjarlais, Owner and Maker at Fitswell Apron Company in Portland, ME, shares his career timeline and advice for up-and-coming talent.

“When I quit cooking professionally, I realized I didn't know anything else but cooking and hospitality. I had been an apprentice upholsterer and then recognized that most of my cooking career was based on the simple lessons my grandfather taught me about the pursuit of perfection and knowing that you can only try for excellence. Nothing is perfect, but those who strive for excellence come awfully close. „

EXPERIENCE
2018 - Present
Owner and Maker
Fitswell Apron Company
Portland, ME
2011 - 2018
Designer / Seamster / Leatherworker
Weft & Warp
Portland, ME
2014 - 2014
Food Writer
Zest
Portland, ME
2008 - 2011
Chef / Owner
Evangeline
Portland, ME
2006 - 2008
Cook / Owner
Ladle Soup House
Portland, ME
2002 - 2006
Chef / Owner
Bandol
Portland, ME
1996 - 1996
Head Baker, Breakfast Cook
The Manor on Gold Pond
Holderness, NH
1993 - 1995
Prep Cook, Dishwasher
Various Restaurants
Grateful Dead and Phish Tour Route
1992 - 1992
Pizza / Sub Maker
DW Pizza
Merrimack, NH
1988 - 1991
Apprentice Upholsterer
Grandfather's Business
Merrimack, NH
I've learned to be more accepting of other people's opinions. Not necessarily about sewing, leather working or cooking, but life in general. Mentors and teachers are everywhere. It sounds like cliche Zen babble, but it's true. I worked with a porter named Edgar. He was from Ecuador and had 10 kids back home. Every dime he made went home. He lived in a room below the restaurant and the owners would feed him three meals a day. His room consisted of a bed, a yoga mat, a bathroom and a few photos. And his wardrobe was houndstooth check pants and white shirts. All meticulously folded, everything was square and tight. He would get this really strong homemade liquor sent to him every month, I had no idea what it was, but it burned. He'd have a sip after a 15 hour shift and do yoga then bed. Then wake up, yoga, a walk, then another 15 hour day, 7 days a week. The guy was a machine, and he always said "Keep it simple." That was a great life lesson.
I had a horse tartare in France that changed my life as a cook. That dish, among about a dozen others I have eaten in my life, is what I look to for perfection or excellence.
I've had many mentors, mostly my father. I've learned a ton from porters and plongeurs, practical stuff. I guess my own self-antagonistic side has been my best mentor. Hopefully I will come across in the future as a mentor.
My wife Krista and our daughter Cortland keep me motivated during tough times related to work.
If I could give myself advice earlier in my career I'd say, try to get paid more. And don't use so much caviar.
It's been used over and over again, but it's true. Everything is a learning process. My first bags were terrible now that I look back on them. I get better every day because I can figure shit out and I'm ok with making mistakes. Everyone makes mistakes, but it's what you do with the outcome that matters. Most chefs know this, and it's like beating a dead horse, but true.
I treated my entire career as a learning cook phase. Life has been my internship. A goulash soup and chocolate crepe at a no-name restaurant in Budapest was a turning point. The truffled whole chicken at L'Oiseau and the tasting menu at Girardet, when I was young, were both important. I saw the chefs de partie and commis in the kitchen after service at Girardet (near Lausanne, Switzerland), all banged up but still soigne. Frédy [Chef Giradet] took me on a little tour of the kitchen. That had an impact. I said, "I want that".
Always roll your apron, always fold your towels and always cut the painters tape with scissors. Don't rip it. And try not to fuck up. Also, never hammer upwards.
Bob Kramer is a bladesmith out of Washington state. He's a brilliant craftsman and artist. I ordered my first Kramer custom in 1997 or so, and received it about a year later. His wait list was long back then, and now his handmade knives are almost unobtainable. I ordered 6 others over the course of a decade and the wait became longer and longer. He's a prime example of the relentless pursuit of excellence and it is evident in his work. Any time I run in to an obstacle I always ask myself "What would Bob do?"
There are a handful of bladesmiths these days who are putting out some amazing kitchen knives and I look at their stuff and I'm just amazed. Their work has to be precise otherwise the knives wouldn't work. Sharpening and honing knives are skills that any chef should have and I think that the process is a great exercise for anyone who likes to meditate on a procedure.
Disclaimer: Individuals featured in the Inspirational Career Timelines section have been nominated by peers, colleagues and/or other members of the hospitality industry. It is to the best of our knowledge that each individual has demonstrated leadership and acted as a positive role model for others.