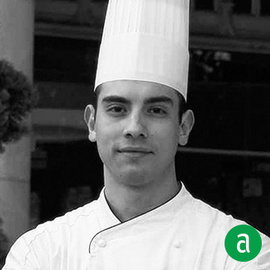 “What keeps me pushing everyday to succeed, in this business, is the fear of not being good enough. I always try to be better than the day before. If not, what would be the point of working in such a hard industry? To me, this is one of the most beautiful arts out there. Every season brings different colors, emotions, feelings and, most importantly, flavors. I push myself every day because I want to learn as much technique as possible so that, one day, I will be able to take all of these things and put it on a canvas, or my plate, and start to create my own art.„

2007 - 2009
Culinary Arts, Pastry and Baking, Dining Room Management
The School of Cooperative and Technical Education
2007 - 2007
GED Plus
Flowers with Care
I learned the hard way that a Michelin starred restaurant is an extremely difficult work place. I'm almost grateful that I was very green and naive when I decided to venture into that level of cuisine.
Some great pieces of advice came to me from two people: My Chef Chris Leahy always told me that there is no better way to learn than on someone else's dime. And, my Sous Chef at Daniel would tell me to take the work one day at a time so that I wouldn't get overwhelmed. And to own my station - to work as if the place was mine, because when you care, you are more willing to give whatever it takes to get stuff done efficiently and with finesse.
I love this art and I'm actually pretty ok at it. I wish I would have realized this at a younger age so I could have submerged myself into it earlier. Who knows where I would be right now if I had started faster and with finesse.
I spent a number of years in high school on the street where I learned how to run a business without knowing it. How to make the most out of my product to maximize my revenue, to plan ahead, to invest properly in order to stimulate the business and to manage a group of people who are taking serious risks. At Burger King, I learned pretty much the same, except I was dealing with legit people and business. I also learned to clean the broilers and other kitchen equipment, which, little did I know, would come in handy a few years later.
My fellow Cooks and Sous Chefs have always guided me and given me advice during tough times related to work. The fear of the Chef screaming at me has also kept me motivated. But, I know that I'm ultimately training myself while I work, so I stay focused on the long term goal.
My best internship was at BLT Prime because I learned all of my basic, basic stuff there. The Chef took me under his wing and decided to teach and guide me. The cooks were like a family - it was a nice home for a while. Ultimately, this place gave me great connections and a solid foundation to be able to build upon. Knowing what I know now, I couldn't have asked for a better place to begin.
Disclaimer: Individuals featured in the Inspirational Career Timelines section have been nominated by peers, colleagues and/or other members of the hospitality industry. It is to the best of our knowledge that each individual has demonstrated leadership and acted as a positive role model for others.